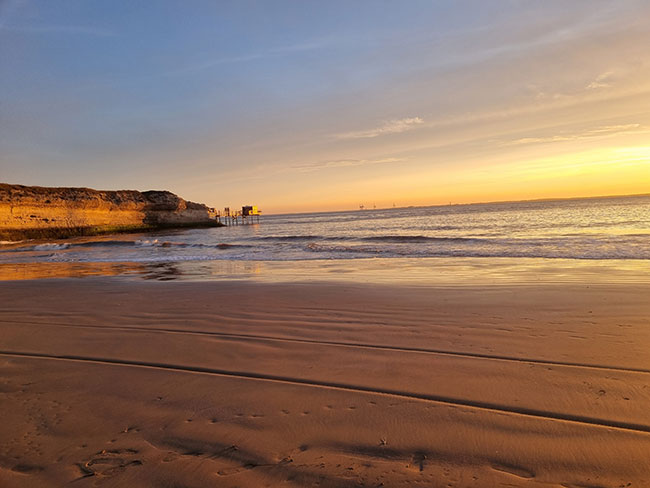 A regon that offers plenty of discoveries

On the sea, on the coast or in the lands, Charente-Maritime offers you various sightseeings.
If you love history, architecture, or off-the-beaten landscapes you should find your dream destination.

Partner of your holidays, Camping Les Loges 5 * provides you with all the tourist documents at the reception to prepare your holiday outings.

The limestone cliffs of Meschers are home to troglodyte dwellings and offer a remarkable view of the Gironde Estuary. Dug by the sea and by man, these cavities are steeped in history! Shipwrecked people, brigands, Protestants have often found refuge there. Follow in the footsteps of their former occupants and their life on the banks of the Estuary during a remarkable reconstruction!

From Meschers to Saint-Palais-sur-Mer, the fine sandy beaches stretch over 70 kilometres, enough to choose a small cove or a large cove. Each has its own style: secret, wild, urban or bordered by a pine forest. These family beaches back onto the seafronts of seaside resorts. You can spend the day there or take a dip in the sea between two activities. Secure and supervised, they host beach clubs and sports activities for the enjoyment of all. Take full advantage of this privileged moment which allows you to commune with nature, sunbathe and swim!

The little extra: sea bathing in salt water is very good for your health, so don't deprive yourself of it!

To Meschers:
- Arnèche beach: Accessible by the coastal path, between Vergnes beach and Suzac beach, a few meters from the campsite.
- Plage des Vergnes: Family beach a few meters from the campsite. In summer, the fireworks start from La Couronne, a piece of cliff surrounded by the sea at high tide.
- Suzac Beach: Beach located within the protection perimeter of the Suzac forest, which borders it. It is the largest beach in Meschers.
- Plage des Nonnes: The active beach of Meschers! Kids club, sailing club and other water activities.
- Conche de Cadet: Hidden, it is accessible by a large staircase. At high tide, the sand is completely covered. Access difficult, even prohibited at certain times of the year. Breathtaking view!

The ZooParc PLANET EXOTICA immerses you in a real exotic universe: snakes, crocodiles, alligators and other reptiles, dinosaurs, greenhouses and gardens, tropical plants, bonsais or thousand-year-old olive trees; you have everything to discover!
More informations: www.planet-exotica.com / +33 (0)5 46 38 00 99

In the heart of the Côte de Beauté and the beaches of Charente-Maritime, a few dunes from Royan, discover one of the most renowned zoological parks in Europe: The Zoo de la Palmyre. Founded by Claude Caillé in 1966, this unique site now includes more than 1,600 animals of 115 different species. Along the shaded paths that wind through 18 hectares of pine forest, observe rare species, and get to know them better.
More informations: www.zoo-palmyre.fr / +33 (0)5 46 22 46 06

Located near the city's Old Port, the La Rochelle Aquarium will take you across the seas and oceans to discover more than 12,000 marine animals distributed in the 3 million liters of seawater in the 78 aquariums . With a space of 8,445 m², the Aquarium of La Rochelle is one of the largest in Europe. From shrimp to sharks, admire the incredible variety of underwater fauna and flora.
More informations: www.aquarium-larochelle.com / +33 (0)5 46 34 00 00

Adrenaline, sensations, and strong emotions are all promises that make the queues for the many rides at Luna Park in La Palmyre get longer. These monsters of technology have become in a few years the kings of fairgrounds for lovers of great thrills.
More informations: www.lunapark-lapalmyre.com

A seaside resort overlooking the Gironde estuary and the ocean, Royan has been a renowned holiday resort since the 19th century for its fine sandy beaches and generous sunshine. Royan has many assets, in particular the quality and variety of its architecture with its Belle Epoque villas and its 1950s town planning, unique in Europe. Royan is a resort that moves, with a range of sporting and cultural activities for all generations, a thalassotherapy institute and a casino that will make you spend pleasant moments of relaxation, as well as many events throughout the year
More informations: Office de tourisme de Royan : www.royan-tourisme.com / +33(0)5 46 23 00 00

The medieval city of Talmont-sur-Gironde stands out on a small peninsula on a rocky peak. Just after the cliffs of Meschers, located on the way to Saint Jacques de Compostela, Talmont was one of the places of passage for pilgrims crossing the Gironde. The Sainte-Radegonde church, built in 1094, remains impressive overlooking the Estuary, on a cliff side. The City hides many other curiosities, between small streets and alleys colored with its hollyhocks which contrast with the whiteness of the houses.
More informations: Office de tourisme de Talmont : www.talmont-sur-gironde.fr/office-de-tourisme / +33 (0)5 46 90 16 25

Built at the entry of the Gironde Estuary, 7 km out to sea, the Cordouan Lighthouse, King of lighthouses, lighthouse of Kings, is equidistant from the Gironde and Charente coasts. It is the oldest of the French lighthouses still in operation. Classified as a historical monument since 1862, its grandiose architecture, the result of a long and tormented history, has made Cordouan the "Versailles of the sea", a unique lighthouse in the world whose visit can only arouse your wonder.
More informations: www.phare-de-cordouan.fr

Located halfway between the islands of Aix and Oléron, Fort-Boyard was designed above all to protect the harbor of the island of Aix and the royal arsenal of Rochefort. Started in 1804, the construction of the Fort lasted more than 40 years. At the end of the Second Empire, it became a military prison then was abandoned at the beginning of the 20th century, prey to looters. In 1950, it was listed in the Supplementary Inventory of Historic Monuments. Initially acquired by an individual, it finally becomes the property of the General Council of Charente-Maritime. Completely restored, it regains its splendor before being the setting for a well-known game show.

As Fort Boyard is not accessible to the public, take advantage of a wide range of cruises departing from the island of Oléron (Port of Saint-Denis d'Oléron or Boyardville) to get closer to this majestic vessel. Stone. Through the many sea trips that will be offered to you, you can also admire the Chassiron lighthouse or make a stopover on the island of Aix.
More informations: Office de tourisme de l’Ile d’Oléron et du Bassin de Marennes : www.ile-oleron-marennes.com / +33(0)5 46 85 65 23

A city steeped in history, La Rochelle impresses with its two medieval towers guarding the entrance to the port. For 1000 years, La Rochelle “the rebel” has loved being different: a democrat well before its time, it is Protestant when the whole France is Catholic; it finds itself protected from kings when the country bends under the weight of taxes…. Throughout history, it displays its difference. Today, it remains a place of pilgrimage for many tourists.
More informations: Office de tourisme de la Rochelle : www.larochelle-tourisme.com / +33 (0)5 46 41 14 68

City of Art and History, Rochefort presents a unique maritime heritage in the world with the Corderie Royale, the Hermione Shipyard, the Forms of Radoubs, the Old School of Naval Medicine and the Navy Hospital or even the Garden of Returns. The National Maritime Museum, housed in the Mansion of Cheusses, allows the visitor to understand all this maritime history. Above the Charente, between Rochefort and Echillais, stands the very last Transporter Bridge in France.
More informations: Office de tourisme de Rochefort : www.rochefort-ocean.com / +33 (0)5 46 99 08 60

A magnificent building born from the desire of Louis XIV and Colbert to build arsenals for a powerful war fleet. The construction of the first structure began in 1666 and ended in 1669. This 374-metre long building is placed on a raft of oak beams to compensate for the instability of the marshy terrain. Its great length is explained by the need to make ropes with a length of 200 meters.
More informations: www.corderie-royale.com / +33 (0)5 46 87 01 90

Since July 1997, the Hermione-La Fayette Association has embarked on a formidable adventure, the reconstruction of the frigate Hermione, a ship which, in 1780, enabled La Fayette to join the American insurgents fighting for their independence. A ship of more than 65 meters in overall length, with a sail area of 1,500 m2 spread over three masts, the Hermione was built according to the plans of the engineer Chevillard Aîné. Belonging to the category of so-called light frigates, characterized by their speed and maneuverability, the Hermione was equipped with 26 guns firing 12-pound cannonballs, hence its name "12-pounder frigate". It was in 2015 that the ship set off again for America, crossing the Atlantic for History in the footsteps of La Fayette with a crew of 78 people: 15 professional sailors, 56 volunteers who take part in laborers (called "gabiers"), and 7 supernumeraries (technicians, journalists, etc.).
More informations: www.hermione.com